“So what bands should I look into signing?” I asked. „You know this guy, Sam Beam?“ Ben looked at me with his grey blue eyes filled up with sweet excitement and expectation. I knew quite a few of those ‘amazing but still unknow’ bands, but no, I didn’t know Sam Beam (aka Iron & Wine) yet.

Known to be a tireless promoter of his friends’ music, a couple days later he came over with this mix cd. You know, the kind of mix cd we would make back then: with a hand cut cd sleeve, your best attempt at hand drawn album art, and this exquisite collection of rare tunes and live recordings from your favorite bands. His mix included a few tracks from his band called Carissa’s Wierd and one track called „Carissa’s Weird“ by Sam Beam. And I loved it. Ben explained that Sam and he were sharing music back and forth and how Sam kinda liked a CW melody so much that he put it into one of his songs and named the song after the band. I still have that mix cd, and in fact I am listening to it as I type this.

So to connect the dots quickly for you guys: Ben is Ben Bridwell, nowadays lead singer of Band of Horses. And that was back in June 2003 if I remember correctly. I was staying with him and his band mates Mat & Jenn on Capitol Hill, Seattle crashing on their couch for a couple days as I was in town trying to sign bands for my booking agency. It was just a couple months before Ben on August 1, 2003 sent me this email announcing “Carissa’s Wierd has broken up” and that he and Mat “are possibly moving to Los Angeles in a couple months to work on some new projects.” Little did I know that this was going to be the birth of Band Of Horses…

They all seemed to be working at this burrito place called Bimbo’s and some other bar jobs just barely getting by, to be honest. Just like a lot of bands do. But there was this magic. This magic amongst them and their music, that made me fall in love with them so badly. „Such defiantly pretty music, simple and stripped-down yet lushly layered with self-recorded backing vocals and the familiar lull of tape hiss.“

To then go from barely getting by to playing sold out stadium shows all over the world, to me, is a true testament to talent. A talent so deeply rooted that it will always find its way to an audience.

Now, Zermatt Unplugged at Kaufleuten, Zurich isn’t exactly a stadium. In fact it’s quite the opposite. It’s intimate, it’s acoustic, it’s close up. Which is why this is such an incredible and rare chance for all you guys to go see a band this size! And not just Band of Horses, but this beautifully curated line up of artists like Half Moon Run, Cat Power, Richard Ashcroft to name just a few. (There is a stream of Half Moon Run’s brand new album “Sun Leads Me On” to be released Oct 23rd currently happening over at CBC, enjoy!) 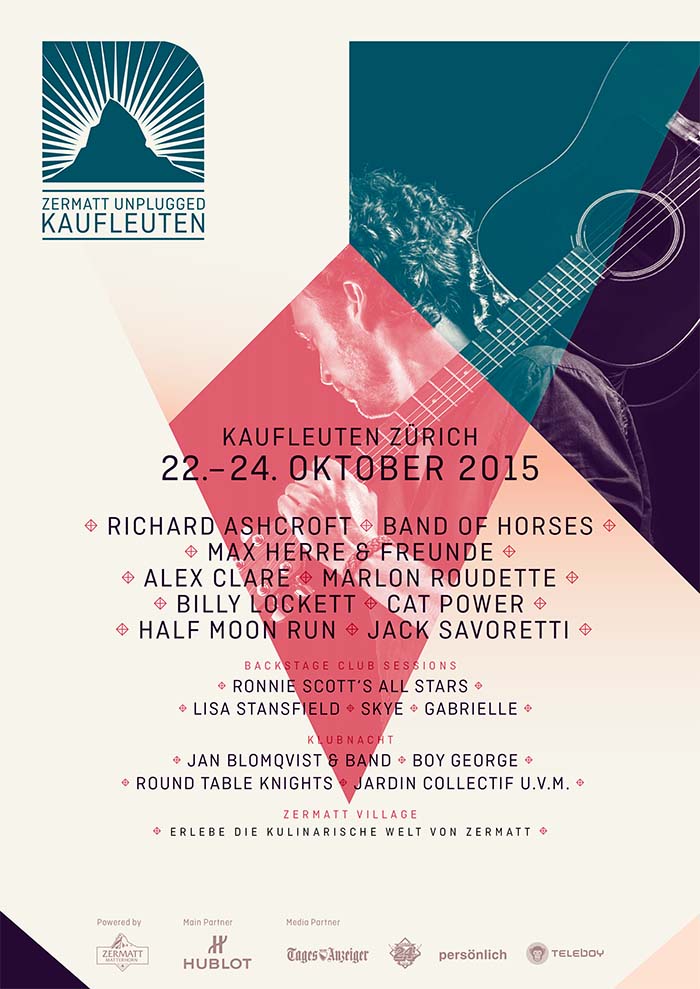 And since we’re in Switzerland – and Swiss sure know how to take all things music festival to the next level – on top of the accoustic concerts, there will be delicious swiss food and Zermatt vibes. All happening Oct 22 – 24, 2015!

Now, we will be on site and if you want to join us, make sure to secure your tickets swiftly, if you haven’t done so yet.

OR try your luck with us: We have 1 x 2 tickets to see Cat Power and 1 x 2 tickets for Half Moon Run to give away! Just email us with the subject line „Zermatt Unplugged“ to win@munichandthemountains.com until Oct 21st, 2015 6pm Zurich time. Good luck! We sure hope to see you!

Tegernsee Mountain Hut
The Most Romantic Sunset In The Alps
Uncategorized