Moderat x Pfadfinderei
They Built A World Outside

Moderat x Pfadfinderei
They Built A World Outside
Written By : Nadin Brendel

Everyone remembers their first band crush vividly but few have the privilege of keeping that crush for years on, watching it evolve and progress to heights unknown. Modeselektor was one of my first Berlin band crushes.

In 2001 I moved to Berlin to intern at a booking agency. Working in the music industry, I quickly  was drawn into the Berlin artist scene, everyone sharing the same spirit and enthusiasm for music and concerts. Our little micro culture, was made up of only a few people back then. We enjoyed a sweaty Q And Not U concert at “Wild at Heart”, a drunk Kingklatsche party at Magnet, a sophisticated indie rock show of dearly adored bands (namely Torchous & Blonde Redhead) at the Staatsoper Unter den Linden, just as much as we enjoyed a good club night at Cafe Moskau, WMF or Cookies.

Modeselektor were a household name. It seemed like everyone that had seen them live immediately fell for Gernot and Szary – for the subterranean bass and electrifying break beats, for the sweaty and ecstatic mornings, for the moment your friend Christian – calm (if not, downright shy) by daylight – would be sent into ecstasies ripping off his shirt. (True story.)

Fast forward to 2014, 10 years later, I’d like to think hardly anybody has brought electronic music from Berlin to the farthest flung corners of the world with more passion and enthusiasm than this duo. Pitchfork rejoiced, and Thom Yorke constantly mentioned them as his ‘new favourite band’. Consequently, this applause lead to tours as far as Japan opening up for Radiohead and was soon followed by festival appearances at Sonar or Coachella, blowing people’s minds and hearts wide open.

According to Pitchfork, “Modeselektor is all about thrust and action – the art of dropping heavy bass and making people go apeshit in a club.” However, the CRUCIAL detail in taking the live shows to a whole new level are the visuals by the Berlin design collective, Pfadfinderei [ fɑ:d’fɪndɜ:raɪ ].

Starting off in 1999, Pfadfinderei are 7 guys with diverse backgrounds, ranging from typography and art direction to strategic visual planning and design production. Back in the days, this cluster of advanced media alchemists – given their aggressive passion for live music visualization – would VJ in clubs in Berlin. 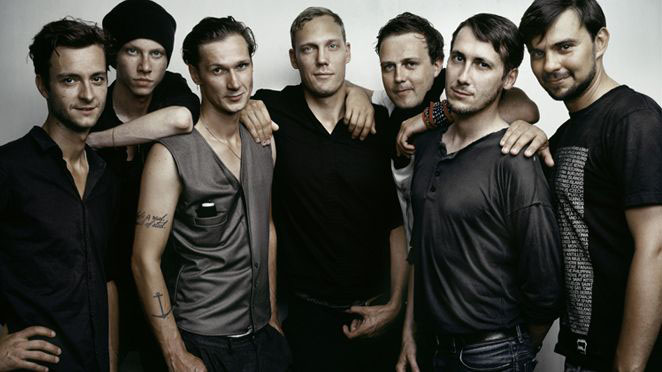 Nowadays, they create and perform full-scale visual installations in and beyond the international club scene (e.g. VJing at the Louis Vuitton store opening in Paris with Pharell) and produce some of the most compelling videos out there right now.

So, to combine Modeselektor and Pfadfinderei while adding Sascha Ring’s (Apparat) sophisticated electronic pop sounds, you have MODERAT, “the most important electronic band since Kraftwerk” according to our pals Pierre & Matze’s Berlin’s blog, Mit Vergnuegen. A superlative yes, but I agree. This collective leads by example. They inspire those close to them to work hard, follow creative intuition, and express that creativity in an authentic way – just as they do. Here’s a few stunning examples of their collaborative efforts:

The video for ‘Last time’ was filmed just outside of Berlin, in its neighbouring state Brandenburg, where Gernot, Szary & Sascha grew up. So did I. I’ve talked to a few of my friends that also grew up in Brandenburg and it’s fascinating to hear how ‘Last time’ is pretty special to most of us in how we connect to the song and the video. Both lyrics (“When I was Dead Asleep // Behind Towering Walls // They Built A World Outside”) and visuals (tree lined alleys & gas station hangs) seem to resonate in an all too familiar way with our childhood and adolescence in Brandenburg. In a good way. Here’s the ‘making of’ with some comments from Flori & Codec from Pfadfinderei:

The band also commented on the video: “The reason why we like it so much is that the three of us are countryside boys, so we’re pretty experienced in hanging out at gas stations and other hot spots. We – almost at the same time – managed to escape to the big city. But, let’s be honest deep in our hearts we are still “Dorfjacken”. (Dorf = village, Jacke = jacket)

For those of you -“Dorfjacken” or not – who feel intrigued to check them out live, here’s all shows in MATM:

We have 1 x 2 tickets for the Zurich show to give away. Just email win@munichandthemountains.com with the subject line  “Dorfjacke” by Feb 10, 2014 and we’ll put your name on the guestlist!